It all starts with the Birch tree, a most beautiful and medicinal tree. 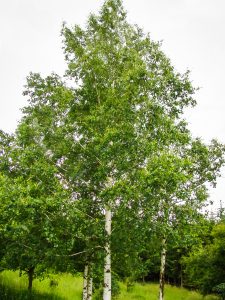 Sometimes the bark of the Birch is opened up, either from cracking during the winter, from a hungry woodpecker, or a burrowing beetle. This opening allows the spores from a fungus, named Inonotus obliquus, to enter and begin consuming the bark. As it consumes the bark, it stores the Birch’s nutritive and immunologically active compounds in a large mass named “chaga”. 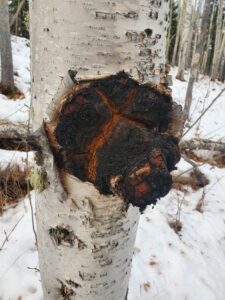 This parasitic fungus almost only eats Birch trees, and only reproduces when the Birch tree is finally killed. Typically, the weakened Birch will snap during a windstorm, right where the chaga grows, and then beginning next season, the chaga’s stored nutrients are finally used to produce the rare and ephemeral chaga fruit body, or mushroom. This fruit body covers the remaining Birch stump with a thick mat of spores that are distributed by the wind, hungry beetles, and as a result, hungry woodpeckers. These spores eventually find their way back into a Birch tree, and the cycle begins again.

An expired chaga fruit body, or mushroom. After the tree is killed, the chaga splits open the bark to reveal a thick mat of reproductive spores.

Chaga looks like a lump of charcoal growing on the side of the tree. It can grow to be very old and very big as it converts the tree’s medicinal compounds into a concentrated superfood. Traditionally this growth, commonly referred to as “chaga mushroom” is harvested and brewed into a tea. Research has shown the properties of chaga have immune boosting, anti-tumor, cholesterol lowering, diabetes fighting, anti inflammatory properties, and an incredibly high amount of antioxidants and trace minerals, not to mention important elements like potassium and magnesium.

Chaga after being partially harvested.